At an activity center in the municipality of Copenhagen it was found desirable to find and present new and different kinds of activities. New activities which would make possible for the old people: to discover new sides of themselves, to use hidden and forgotten facets of their beings, strengthening their confidence and faith in themselves, and achieve a creative, embracing and binding fellowship. One chose to put up a theatrical performance. For doing a theatrical performance, one needs not just only actors, one needs also a stage, costumes, props and maker-ups.

This project took six months. Each and every single one was assigned a certain task, an area of responsibility. There were 14 actors, 4 dancers, a choir of 12 members, and all the others with different roles behind the scene.

The project was quite a success. The play was called: Have you heard? – A play about love. The piece used the own ideas of the older people. Visiting teachers came during the project: A clown, an actor, a storyteller and a speech coach.

With time, the self-respect of the older people increased. Their gait became faster, their backs straighter. Many more came, even though their infirmities previously had kept them at home. A committed community evolved, wherein nobody could be done without. It was evident when somebody was not there. So, one was missed, and one’s contribution too. 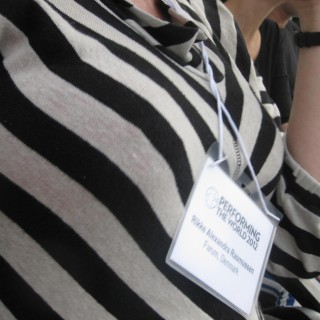